Who Knew Chickens Were So Interesting?? 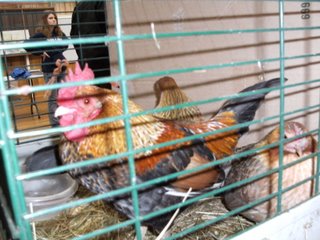 Yesterday, the coast had many activities to choose from. The one that was elected for my adventure was found in the following newspaper. It’s a great little read with tons of interesting facts, events and local culture. The visitors love it as they can grab a free paper just about anywhere and instantly know what’s going on at the beach,, from Florence up to Tillamook. In this article, notice the Yachats event.
http://www.oregoncoasttoday.com/topfive.html

A chicken show for goodness sake. I would never have guessed that that would be something I would drive almost 20 miles on a gorgeous Sunday afternoon to attend, but I was there. It was too fun. These folks know how to laugh and have a good time. Maybe 15 chickens were in attendance in their portable cages–and one duck, they would not hold still for the photos.

The Coastal Cluckers Chicken Show was sponsored by the Lucky Cluck Farm cooperative http://www.luckycluckfarms.com/ and the Coastal Critters 4-H Club. These folks were all about getting the word out about how cool chickens really are and what benefits they can provide to their owners. There was also an official chicken judge in attendance who clued us newbies in on the particulars of pretty chicken judging. Candy corn was given out as refreshments as well as chick-o-sticks. All the serious chicken folks had chicken type clothing on. One was totally dressed as a chicken and his job was to stand on the corner and wave us into the event. Other folks had clothing decorated with chickens–I could really get into that part for sure–not so much the whole chicken costume though. Looked Hot.

So, turns out there are a lot of folks who would love to own a chicken but maybe they live in an apartment or town where it’s not allowed. So this coop lets folks join and have their chickens live at the Lucky Cluck Farm. There are also responsibilities attached to owning chickens in the coop. I have to say, this morning I spent a couple of hours purusing their website, blog and past newsletters. I laughed a lot and it felt so good. I am still grinning as I write this piece.

I recently spent 10 days in Hawaii and on the way home, we stopped in Maui to see my son who lives there. He took us to see some friends who have many chickens and I was enthralled with all the different kinds and their behavior. You could spend a lot of time just watching these feathery critters. Turns out it is a great past time. So I am studying the ins and outs of chicken ownership. I will keep you posted. Bari
About BariPatch