Another Fun Day at Work 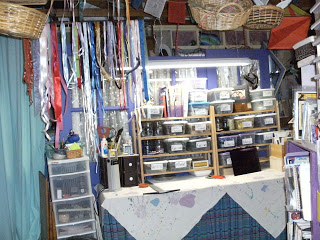 So,, yesterday I was playing in the studio with good friend Carrie who owns the Wine Place in Yachats.  It’s not Carrie’s first trip to the studio.  She is always a little (lot) overwhelmed at the amount of “inventory” as she calls it and the color and sparkle the studio holds.  Yesterday she played with clay for the first time ever in her life..I think she is hooked.  I love it when folks come play in the studio with me–so many creative possibilities–it inspires me.

I was needing to conduct some QuilTak business at the same time so I called one of the inquiries received via email.  I love my job!  I get to talk to the sweetest folks.  This lady is from Massachusetts I believe she said.  She is over 80 years old and just a fun person to converse with.  She has an eight year old granddaughter who is hooked on sewing and crafting,, to her grandmas delight.

The story goes like this.  She has a friend who is 84 I think she said whose daughter found her a QuilTak at a yard sale recently.  Well that has changed her life literally.  This friend puts quilts together on a continual basis and gives them to folks in need or friends or whoever,, just so she has a reason to make another quilt.  I answered all her questions and she said she needed to talk with her friend and they would mail in an order. So a little while after talking to this lady, her friend called, the 84 year old, and we had a great chat.  She has five quilts waiting to be basted and she needs Taks quick for the tool.  I asked to make sure she had The Original QuilTak tool and she said, yes it was orange and had the sticker saying Flagstaff on it.  Well that was our original tool back 20 years ago.  I assured her that it still takes the same needles and taks, but the current tool is purple–of course. She’s mailing in her order ;-)))
It is really nice to provide great customer service to the sweetest folks in the world–quilters!!!  And it’s really, really, nice to be coming up on our 20 year anniversary of doing business.. Yeah for QuilTak!!!